Winner Announced and the Trek Story

Last week I announced a contest with the winner receiving a free autographed copy of my memoir Soar Unafraid: Learning to Trust No Matter What as the prize.

Mary Morgan is the winner!

Mary wrote that she watched The Good Life TV interview live at ctnonline.com. She said in her email, "You did a great job in the interview! I love the name you came up with your crutches--"Cool Aids"--that is so clever. You are quite the adventurer--skiing, horse packing trips, etc. I really enjoyed hearing your story. Hopefully lots of people saw the show and the publicity helps you sell lots of books."

Thanks, Mary for writing such encouraging words to me. We're shipping the book to you right away.

I need to share with Mary and the rest of you how the name "cool aids" came about. While I was single I took a wonderful trip with a dear friend, Ruth, and her three children. (The Peters family adopted me, so to speak, and we are close to this day.) Well, we five were hiking in the Petrified Forest in Arizona when teenage David said, "You really get around." I told him it was because of my aids (forearm crutches). He dubbed them "Cool-aids" at that moment and the name has stuck.

I promised last week to tell about the long trek I took getting to Florida to do the TV interview in Clearwater (near Tampa). I had sent my book and media kit last spring in 2007 to the show producer and fortunately she didn't contact me requesting an interview during the summer because the MS hit me hard and I wasn't in any shape to even go out of the house let alone fly by myself anywhere. (This was another of those times when you know God is working all things together for the good as Romans 8:28 says because we were praying CTN would contact me and fortunately they didn't when we asked, but in God's perfect timing!)

In early November I was contacted for the interview to be taped live on Tuesday, December 16. She booked my flight--the only one available from Portland, Oregon (we live 30 minutes north of there in Washington state) to Tampa for Monday, December 16. I literally had to get up at 2:30 am in order to get to the airport at the check-in time. UGH. I went to bed at 8:30 pm Sunday night and awoke alert and praising God, singing while I applied makeup.

When I fly I use my portable wheelchair with cushions that are removable. Airport skycab push me between terminals and the airline personnel take out the cushions for me to use in the airplane because they're much more comfortable than the airplane seat and I can handle the flights better. My wheelchair is then taken into the cargo hold and brought back to me when the plane passengers have departed.

The ONLY possible flight stopped in Denver and then Chicago before arriving in Tampa eight real-time-hours after it began (not including time changes). That is a long day for me.

But the great thing was the people I got to talk with for 8 hours. The eleven year old who wanted me to read the story she was writing, and then a poem, and she was so excited because I was an author. She was traveling between parents who live on opposite coasts . . . And so many others . . .

A nice guy who works for CTN picked me up at the airport and drove me to the hotel after offering me dinner which I turned down. I just wanted to eat my almonds and high energy Kashi bar and go to bed, which I did by 8:30 pm EST after calling home to my hubby!

Steve picked me up again in the morning to take me to CTN's studio where we did the live interview within 45 minutes. One take and the producer excitedly handed me the DVD so we can upload the program to my website (it's in the process of being added this week.) She had told me before taping they like to do it live as much as is possible and she cried as she hugged me, "That was great! Perfect! Well-worth you flying across the country!"

Then I chatted warmly with the program host's assistant Stephanie (who had read my memoir and recommended I be asked as a guest) for perhaps an hour. Steve then took me back to the Tampa airport and I began the long trek home via Denver this time. I arrived at 10 pm PST to my husband's big hug and kiss.

On the way back I had the most wonderful conversations with people about their lives and why I was making this long round trip in only two days. Everyone has unexpected things happen in their lives, not just me, and their stories, our shared laughter and tears will remain with me for years if not till I die.

The trek was definitely worth it and ordained by God. Emails and phone calls have blessed me richly as well as book orders. I am touched because I believe my memoir--due to responses I have received--IS impacting lives and that is why I wrote it.

Some thoughts next week about some responses I received . . .

Hope your week is full of wonderful treks--even if they are only in your dreams. (I have a lot of fun dream treks and I dream BIG!)

Everyone loves a freebie, I've been told. Well, I've never hosted a contest before, but I am beginning 2009 by doing so!

Anyone who posts a comment after viewing a TV program on which I will be appearing Friday evening (this coming Friday, January 9) will be eligible for a FREE AUTOGRAPHED copy of my award-winning memoir Soar Unafraid: Learning to Trust No Matter What!

The program to watch is "The Good Life" on CTN at 9 pm EST. You can find CTN on DIRECTV channel 376 and DISH Network channel 267. You can also go to this to check out various markets where it is showing or you can watch it online.

On January 12-16 I will announce the winner who will be drawn randomly from those who post comments or email me from my newsletter we are sending out on Monday. Anything you'd like to share about what you learned, something you thought was funny or an "ah-ha" moment, just so long as you're not totally negative will be accepted. We will ship my book to the winner at our expense as well.

And next week I will share the amazing story of how I got and from to Tampa, FL to shoot the live taping on December 16. Considering the fact that I was so weakened by the MS last summer, it's quite a story.

Have a great first week of the new year! 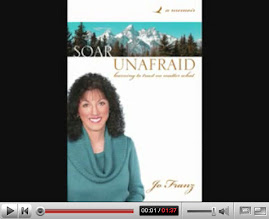 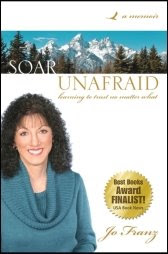